University of Edinburgh    School of Chemistry 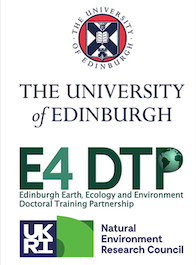 Noctilucent clouds form at extreme mesospheric conditions and are sensitive to any small environmental changes. We will combine modelling and experiments to unravel the molecular mechanisms responsible for their evolution and growth.

The highest clouds on Earth, noctilucent clouds (NLC) named for their night glow, are formed 75-90 km above the ground at the boundary between mesosphere and thermosphere. The extremely low temperatures and pressures make those clouds the only location on our planet where ice is found not only in the common hexagonal but also cubic and amorphous forms.[1]

The formation and evolution of NLC is poorly understood, even though their appearance may be linked to the changes in the global climate.[6] Indeed, it is possible that the first record of NLCs observation was two years after the eruption of the Krakatoa volcano in 1883.

The study of the NLC is limited to satellite observations, where spectroscopic measurements can only resolve short-range interactions and are unable to inform on the long-range structures required to identify ice forms and transitions.[3] Laboratory experiments show that under mesospheric conditions, the first step of ice formation is the homogeneous nucleation of low-density amorphous ice (LDA), followed by crystallisation into a stacking-disordered ice Isd, a combination of hexagonal and cubic forms.[1] LDA is an extremely porous material, observed to pick up and retain volatile molecules from its environment. When located in the mesosphere, these ice structures are subject to strong radiation, collision with incoming energetic particles (electrons, protons, ions), and chemical enrichment from cosmic dust. These conditions make LDA particles effective chambers for complex heterogeneous chemistry.[2]

The processes occurring at a molecular level in the mesosphere can have a dramatic influence on the kinetics of ice particle nucleation and growth, phase transitions, ice particle shape, stability, interactions at the interface, particle coagulation, and sedimentation. Clouds are the barrier between us and space – they regulate Earth’s energy balance, protecting life from solar radiation while retaining infrared heat. NLC form in extreme low temperatures and low particle densities, which makes them very sensitive to any changes either of cosmic, natural or anthropogenic origin. In this project, we combine laboratory experiments and molecular modelling to develop a deep understanding of the fine interactions that influence the growth and stability of mesospheric clouds.

In this project, we investigate the interactions between ices formed at extreme low temperatures and molecules whose concentrations may be affected by external factors, such as human-related activities or meteorite showers. We have identified the following compounds as topmost priorities for investigation:

The ice growth will be carried out through vapour deposition in the temperature-controlled Linkam THMS600 stage, which additionally can be fitted with a vacuum chamber.

Samples submerged in liquid nitrogen will be transferred for XRD and FTIR measurements. When formed, the ice forms of interest are known to be stable under liquid nitrogen. Porous ices are known to pick up volatile gasses, but the nitrogen has the lowest binding affinity and therefore will not contaminate the sample. Therefore the presence of nitrogen gas, arising from the liquid nitrogen, will allow the removal of any other volatiles in the surrounding environment.

If in situ measures are deemed necessary, the Linkam stage can be converted for both XRD and FTIR measurements.

The deionised water bath will be fitted as a source of water vapour, and additional reservoirs with gasses will be added into the sequence.

Classical molecular dynamics (MD) will be performed to sample the ice structures and transitions. Adsorption of the gas molecules will also be accessed to obtain the most statistically probable configurations for further detailed investigations with quantum methods. MD simulations will be performed using GROMACS software on CIRRUS HPC. The analysis will be carried out with GROMACS and in-house scripts.

These statistically representative structures will be transferred for further quantum chemical (QC) studies to obtain information about the spectral activity of the selected molecules at the ice interface. All (IR, Raman, UV/Vis) spectra predictions will be obtained with the Turbomole and TeraChem packages, combined with Newton-X to make use of the nuclear ensemble approach.

A motivated student with a degree in Chemistry, Physics, Astrophysics or Geosciences, and interest in atmospheric processes and extreme conditions.

Experience in molecular modelling and/or coding will permit a fast start on the project. Nevertheless, all the necessary training will be provided.

The E4 DTP studentships are regulated by the UKRI Training Grant Terms and Conditions.

How good is research at University of Edinburgh in Chemistry?