Improving the understanding of Gadolinium for use in Neutron Detectors 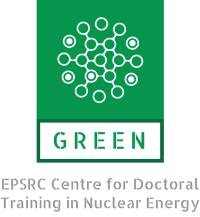 This project will primarily be based at: The University of Liverpool

Neutron detectors that employ Gadolinium (Gd) as the neutron capture agent can be enhanced by improving the understanding of the subsequent gamma cascade of the neutron capture on Gd. This would open up a new area of development where the neutron has the potential to be (partially) tagged, resulting in better background discrimination. This is particularly useful in large area detectors where intrinsic radiation in the scintillator or the photo-sensor itself is a large source of background, enabling new deployment scenarios.

Gd(n, gamma) interactions have been studied and the integrated spectrum is known, but the individual decay modes have not been measured. The 4-gamma mode is dominant, although these are not measured to be discrete energies and it is not known if the energy of the four gammas is equal to the Q-value of the decay (8 MeV). Given the available energy there is likely to be multiple sub-MeV cascades. The PhD will calculate and measure the gamma spectrum, hence determining what is missing in each detected event and allowing the events to be tagged.

Check out our other PhDs in Nuclear Physics